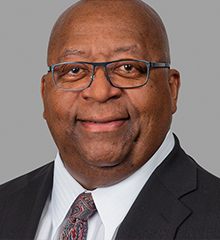 Joe Laymon is an accomplished C-suite executive and independent board director best known for his 30 years of leadership contributions to human resources at several iconic, multinational brands including Chevron, Ford Motor Company, Xerox, and Kodak. Over his career, Laymon has had a track record of success in managing diverse global workforces and overseeing several senior leadership succession initiatives.

In addition to his work at The ExCo Group, Laymon owns JWL Consulting LLC and is the co-owner of Vinnie Johnson Enterprises, which is the majority holder of Detroit Thermal Systems (DTS). Laymon also serves on the board of directors of Peabody Energy, Clearwater Paper, The Piston Group and DTS, and is a member of the University of California’s Cal Performances Board of Trustees. His previous directorship roles include Molex and DTE Energy, two publicly held companies.

Laymon worked for the United States Agency for International Development (USAID), with assignments in Zaire and Washington, D.C. prior to joining Ford. Additionally, he held a number of senior human resources jobs at Xerox Corporation, including chief labor negotiator, over the course of 17 years. He then moved to the Eastman Kodak Co., where he held multiple senior human resources positions.

Laymon earned a Bachelor of Science from Jackson State University and a Master of Arts in Economics from the University of Wisconsin.