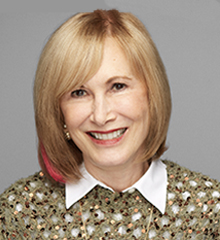 Valerie Salembier is an accomplished corporate executive, board director, and respected civic leader. She brings a proven track record of transformational growth in the media and publishing industries, leading world renowned brands such as The New York Times and Harper’s Bazaar to financial, strategic, and operational success. At The ExCo Group, she mentors Fortune 250 senior leaders and emerging C-suite executives.

In addition to her work at The ExCo Group, Salembier is president and CEO of The Authentics Foundation, an organization that provides consumer education about the counterfeiting industry. Recently, she served as CEO of Rubin Singer, a third-generation couture designer.

Fulfilling a life-long commitment of service, Salembier has held leadership positions for civic and sports organizations. Since 1990, she has been a member of the board of trustees for the New York City Police Foundation, chairing the Foundation from 2005, and ultimately assuming the position of assistant police Commissioner/NYPD with responsibility for public information and media relations, reporting to former Police Commissioner Raymond W. Kelly. In this role, she provided strategic counsel to the Police Commissioner and developed more than $50M in financial support for a number of NYPD efforts not funded within the city’s operating or capital budgets. She was appointed commissioner of the New York City Sports Commission by former Mayor David Dinkins, and was appointed to the board of the New York City Sports Development Corporation by former Mayor Michael Bloomberg.

Salembier is the recipient of the 2014 New York Business Journal’s Women of Distinction Award, the 2001 Matrix Award for Exceptional Achievement, the National Council of Jewish Women’s Women Who Dared Award, the YWCA Academy of Women Achievers Award, the Ellis Island Medal of Honor, and Concern Worldwide’s Woman of the Year Award.

One of 10 founders of Fantasy Baseball, Salembier is an author of Rotisserie League Baseball and writes for various magazines on career development and other topics.