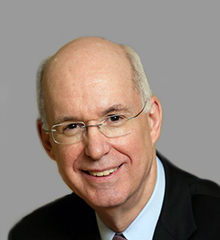 Kenneth Freeman is a transformational CEO, chairman, private equity director and business school dean. With more than 40 years of leadership experience, Freeman is known for his leadership in executing or advising a number of successful turnarounds and providing record shareholder returns. In 2010 and again in 2013, Freeman was named one of the 100 best performing CEOs in the world according to a study of global business leadership conducted at INSEAD and published in the Harvard Business Review.

Freeman served as CEO and Chairman of Quest Diagnostics Incorporated after the company was spun off from Corning Incorporated. He created exceptional value for shareholders by leading a dramatic turnaround grounded in culture change with a focus on employee engagement and customer satisfaction that yielded the third highest five-year shareholder returns among the Fortune 500. In 2004, Freeman was named to the Business Week 50. Market capitalization increased from $350 million at the time of the spin-off to over $9-billion.

Most recently, Freeman served for 8 years as the Dean of Boston University’s Questrom School of Business. During his tenure, the school transformed its undergraduate and MBA school curricula, with a focus on ethics and global citizenship and also received the largest gift in university history. Freeman currently holds the title of Dean Emeritus.

In addition to his work at The ExCo Group, Freeman is the chairman of the board of Laureate Education, the largest international network of for-profit higher education institutions, is a director of the Center for Higher Ambition Leadership, and is a member of the AACSB Business Practices Council. He has served on a number of boards (often as chairman or lead director), including HCA Healthcare, Lake Region Medical, Masonite, Alliance Imaging, TRW, Dow Corning Corporation, Ciba-Corning, Fleet Bank of New York, Bucknell University, the Graduate Management Admission Council, and the Corning Incorporated Foundation.

Freeman joined Kohlberg Kravis Roberts & Co (KKR) in 2005, where he was a managing director and partner until his appointment as Dean at Questrom in 2010. From 2010-2013, he was a senior advisor to KKR, serving on the firm’s portfolio management committee.

Freeman received an M.B.A with distinction from Harvard Business School and a B.S.B.A. from Bucknell University.