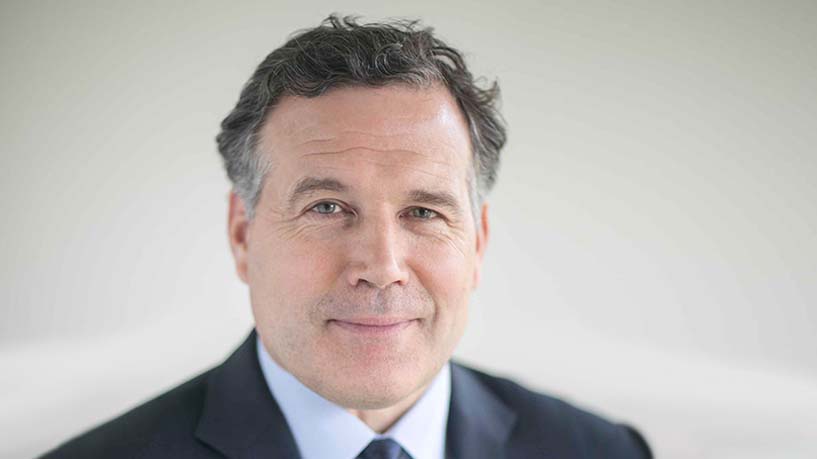 Q. You have an unusually varied background that includes roles in the Treasury and Commerce Departments, the National Security Council, and also running tech firms before moving into your current role in finance. What was your playbook for building your career and moving into such different environments?

A. It’s only been in the last 10 or 15 years that my dad has thought that my career path made any sense. For the first 20 years or so, he would have attributed that to not being able to stick to anything.

I certainly was ambitious to succeed, but the common thread was shooting for an incredibly interesting set of experiences. It wasn’t to be in the corner office. That approach has been liberating because each new thing is an adventure. You don’t quite know how it’s going to work out, but it becomes just another chapter in what hopefully will be a very interesting book.

If you think about it that way, then you’re able to enter these new situations with optimism that it’s going to be successful because success is defined a little bit differently. You approach everything with a lot of curiosity.

Q. I find a lot of young professionals are more focused on a more planned approach to managing their career, and they set milestones around titles and pay that they want to achieve in a certain timeframe.

A. That is a path to potential unhappiness because the people who are really locked in on specific goals miss so much of the journey of figuring it out. Even if they achieve their goals, they risk missing all the exciting options along the way and maybe not really understanding what reaching that end goal would be like.

I always encourage people to broaden their aperture.

I have this joke that the only people I know who are desperate to be a CEO are the people who have never been a CEO, because the job is far from perfect. I always encourage people to broaden their aperture.

The idea of being CEO of Bridgewater or being in the Treasury would have never occurred to me in a million years when I was in my late twenties or even thirties. Those doors opened in part because I was open about the possibilities. The more closed you are, the more likely you’re going to pass an open door and not even see it.

Q. Tell me about your earlier years.

A. I grew up in a mill town call Bloomsburg in northeastern Pennsylvania. My father was the president of the small state college there, where most of the students were the first in their families to attend college. I played football and wrestled, and I worked the whole time, with two paper routes and a job as a busboy at the local restaurant on weekends. I baled hay, and trimmed trees on the Christmas tree farms.

I probably defined myself more by sports than academics, which was evident in my academic results. But I was recruited to play football at West Point, and that opened the door to this incredible set of experiences I’ve had.

Q. What are your core leadership values?

A. It’s not about you. It’s about the team and the mission. It’s a privilege to be in a leadership position, and it carries a huge responsibility and demands an enormous amount of humility.

I learned those basic lessons as a 22-year-old platoon leader of 30 paratroopers. I really look for people who exemplify those ideals, and I have a low tolerance for people who think that it’s about them. I don’t want those people on my team.

The second thing, which I’ve learned at Bridgewater more than in my previous roles, is the benefit of being open about mistakes and problems, and bringing those problems to the surface in a very genuine way for the team to solve. Any problem can be overcome if you confront it and bring the right minds to bear.

And then, maybe to a fault, I really invest in personal relationships. I’m not the guy who you have the formal meeting with every Thursday afternoon. I’ll call you about an idea, or discuss a challenge over breakfast. It’s much more of a dynamic orientation.

Q. A lot has been written about Bridgewater’s unusual culture of radical truth and transparency. It’s not for everybody.

A. That’s right, and we believe that that level of directness helps ensure that duality doesn’t exist in our firm, so that there is no difference between what you are thinking and what you are saying. We think there are a lot of benefits in that approach to ensure that ideas are stress-tested and to help people grow and evolve more quickly.

That’s the aspiration, but it’s hard on two dimensions. First of all, it’s easy to slip. It’s not a natural muscle, and it takes new employees time to be integrated into it and see the benefits. People aren’t naturally inclined to say the hard things that are uncomfortable to say.

It’s hard to maintain that, and it’s similar to what happens when you don’t go to the gym three days in a row, which makes that fourth day a lot harder. So we’re working hard for it not to fade, but you have to keep reinforcing it.

“It’s not for everybody, and this is a process of self-discovery.”

The way I talk to new recruits about it is to say, “It’s not for everybody, and this is a process of self-discovery. A big part of whether you should be here is what you really want, because it is something that will require dedication and commitment.”

Usually a good test is someone who really genuinely likes feedback. They may have played sports and they can connect to the idea that the coach giving you feedback is almost never saying, “Here’s all the things you’re doing great.” They’re almost always saying, “Here are the things that you need to do to improve.” It’s about wanting to get better every day.

Q. When you’re interviewing job candidates, what are the X-factors you’re looking for besides the one that you just described?

A. I look for people who have made interesting choices. I’m less interested in people who made predictable choices or followed some rote pattern. That’s not a black-and-white statement, but I’m really interested in the person who took a semester off and worked on a salmon boat in Alaska. I’m interested in the senior Wall Street executive who spent three years in his 30s in the priesthood.

I’m also listening for the quality of their questions. Is this someone who has really wrestled with the opportunity in front of them? With Bridgewater, there’s a lot to wrestle with, so I like to hear someone asking me to explain an aspect of our culture that they want to understand better. I’m very suspicious of someone who’s coming in packaged and saying things that seem designed to just get the job.

I’m also really interested in hearing about their failures. I’ve had some doozies. I like to hear that people have failed and come off the mat and then succeeded or been able to stabilize. A big part of success is resilience, and I really appreciate people who can see the incredible value that comes from failure and learn from it.

Q. I liked your line from earlier that a lot of people who are desperate to be CEOs have never been CEOs. What are some realities of the job that people may not appreciate from the outside?

A. It’s a huge responsibility. If you’re a good human and a good leader, it weighs on you. Some people thrive on that stress and that pressure, but even for those who thrive on it, I think it takes a toll, and it certainly requires tradeoffs.

Another dimension is that it’s a constant journey. I became CEO of a public company when I was 25, and I’ve been mostly in big leadership positions for 30 years now. I’m learning every day, and I’m messing things up every day, and I’ve had to relearn things that I learned a long time ago.

In some cases, the old moves that have always worked for me aren’t working anymore. If you’re really pushing yourself to be better, there’s no day where you say, “I’ve got this.” There are always external challenges that require a new gear, a new pace, a new set of ideas.