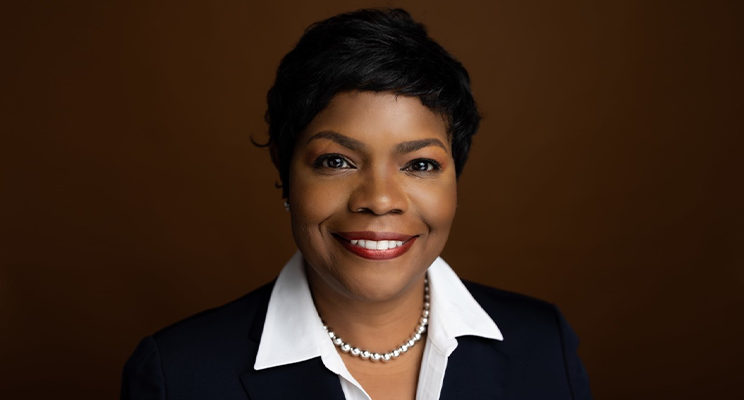 Reimer: What leadership muscles have you built over the last two years that you want to carry forward?

Johnson: All the leadership characteristics that mattered before the pandemic had to be on steroids through the pandemic. The most important for me centered around humanity, compassion and transparency.

When you’re working with people in a virtual environment, it became much more of a challenge to be close enough to people for them to see your sincere leadership. So I had to think of new and creative ways to demonstrate compassion and transparency. I’ve been very deliberate about allowing people into my home with me.

My daughter brings my granddaughter over for lunch some days, and of course she’ll wander into the room and into a virtual meeting sometimes. As everyone shared more of their lives, people got more comfortable with the fact that we could operate in a different way — that we could see each other in a new light and still be okay. That different kind of transparency became super-critical to us in our organization.

And compassion has been key. So many of our employees have been ill through the pandemic, and people have lost family members. Everyone’s had some kind of struggle or challenge. You have to let people know that it’s okay, that it’s going to be all right. The world will go on and things will get better.

Bryant: One of the many big shifts of the past two years is that employees increasingly feel like they should have a voice and a vote in company policies. What’s your framework for thinking about that?

It’s about being able to say to people, “This is who we are. This is what we stand for. Here’s our purpose and our mission. Here are the challenges we have. Here’s where we can say yes, and here’s where we are going to say no.”

It’s the credibility that you establish by being consistent.

It’s the credibility that you establish by being consistent. So even if people don’t like your answer, they recognize that you’re standing by your values and what you believe. More times than not, they’ll give you credit for that. It’s about communicating.

We are in a world right now where people are not connecting. Everyone’s talking but there are very few connections happening, and a consequence is that misunderstandings occur. So it’s about investing time and really helping people understand your thinking. And sometimes no is the answer.

Reimer: What’s your take on the “Great Resignation?”

Johnson: People are reflecting more on their own DNA, and they are asking themselves whether they are doing the work they should be doing. And if not, now’s the opportunity to take that DNA and put it to work in the right place. I want people to do that, even though there are times it may be painful for people in my role who are concerned about recruiting and retention. But when people’s DNA is being used the right way, we all are better off.

Bryant: What is your advice to aspiring CHROs?

Johnson: My advice to people who want this job is to recognize that your first team and obligations are to your C-suite team members and overall business. And that the HR function is secondary to that. Second, I would say that anyone who is aspiring to this job should be very thoughtful about who you pair with. One of the most important relationships CHROs are ever going to have in their career, almost as important as their spouse, is going to be your CEO. You want to have a trusting working relationship with that leader for what I call the “After 5” conversations.

You have to be willing at any moment to put your job on the line.

Reimer: How do you figure out on the front end whether you can have that trusting relationship with the CEO before you start working with them?

Johnson: Some things you just aren’t going to know about people until you start working with them. But most people who’ve gotten to this point in their career in HR have already figured out how to work with a variety of leaders. But it’s helpful to ask questions like, how open are they to receiving information from you or feedback? What happens when I bring you bad news? And you have to know your ability and tolerance for working with certain kinds of personalities.

Bryant: What were some early influences for you that shaped who you are as a leader today?

Johnson: I grew up on the south side of Chicago in the Englewood neighborhood, which was then and probably still is now one of the most dangerous neighborhoods in the nation. Seeing lots of change and challenge really does stretch you as a human being and compel you to think more broadly about things.

I came from a family of five kids. My parents divorced early, but my dad was always involved, and I had an amazing stepfather. So I moved between two families, and I had three older brothers and a younger sister. I grew up in the days of roller derby and wrestling, and when your brother has you in a headlock, you’ve got to figure out how to get out of it.

All those experiences help build perspective early on, and you just continue to find your way through bigger, more complex situations. And you learn that the world is not going to implode. You might feel like it’s imploding when you’re in the middle of a challenge, but when you get on the other side of it, you look back and think about what you learned from that experience. And you just continue to build on that.