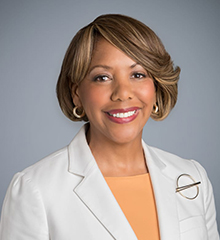 Coretha Rushing is an experienced executive with a demonstrated history of working in financial services, consumer goods, and technology industries. She has over 25 years of HR experience culminating in a 13 year stint as a Chief People Officer. Her areas of expertise include succession planning, talent management, employee engagement and compensation.

For 13 years, Rushing served as SVP, Chief People Officer for Equifax, Inc., a $3 billion global credit and data analytics organization currently based in 24 countries. She joined the firm in May 2006 and led the global HR organization and the company’s foundation during both its greatest period of financial growth, global expansion, product innovation, and during its biggest business challenge, a cybersecurity breach.

Prior to joining Equifax, Rushing served as President of Cameron Wesley LLC, her own human resource strategy and executive coaching firm. In addition, Rushing served in several senior HR functions for The Coca-Cola Company. Rushing was the first Woman EVP for the company serving as its Chief People Officer. During her tenure, Rushing led the development of leading-edge people programs and initiatives, which serve as the foundation for the company’s current leadership and employee programs. Prior to this, Rushing was the Vice President of Human Resources for the Midwest Division of Pizza Hut, a division of PepsiCo. Rushing began her global Human Resources career at IBM where she held several roles during her ten years across all HR disciplines, supporting diverse businesses, in major IBM US locations.

In addition to her current board work, Rushing previously served as Board Chair, Emeritus for SHRM. She also served as a member of the Board for Atlanta’s Big Brothers Big Sisters where she chaired the Fundraising / Development Committee responsible for the financing of their new facilities. She is active in several professional and community organizations and has served as a panelist and keynote speaker at various businesses, universities, women, and human resource conferences. She has received numerous community awards and has been recognized for four consecutive years (2016-2019) for outstanding business achievements by Black Enterprise.