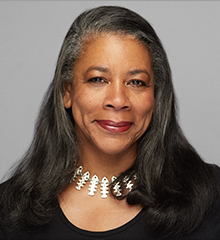 Laurel Richie is an accomplished CEO and board member. She brings more than 30 years of leadership experience in the areas of executive management, corporate governance, marketing and communications. She has a proven track record of success in helping companies align businesses and brands with organizational strategy to drive winning results. She is a frequent keynote speaker on Leadership, Diversity and Inclusion, and Women in Sports.

In addition to her work at The ExCo Group, Richie is a member of the board and independent director at Synchrony Financial, Hasbro, Bright Horizons and SeatGeek, and served as the chair of the board of trustees of Dartmouth from 2017-2021. Richie is also a marketing advisor, helping organizations such as Teach for America hone their business strategy and brand positioning.

As President of the Women’s National Basketball Association (WNBA) from 2011 to 2015, Richie led the league’s business, operations, and marketing initiatives, and became the first African American to run a major US professional sports league. During her five seasons at the helm, the league signed its first marquee partner, extended its broadcast partnership with ESPN through 2025, and entered into an unprecedented eight-year agreement with the players and their union.

Prior to joining the WNBA, Richie served as senior vice president and chief marketing officer at Girl Scouts of the USA. She was also a senior partner, executive group director, and member of the operating board at advertising agency Ogilvy & Mather, where she worked with a host of blue-chip clients including Kimberly-Clark, American Express, Pepperidge Farm, and Unilever, as well as several pro-bono clients.

Richie received her B.A. in Policy Studies at Dartmouth College. She is a recipient of the Black Girls Rock Shot Caller Award, Sports Business Journal’s Game Changer Award, the YMCA Black Achievers in Industry Award and was awarded Ebony Magazine’s Outstanding Women in Marketing and Communications award. Most recently, Savoy magazine named Richie to their “Power 300 List” of the Most Influential Black Corporate Directors.