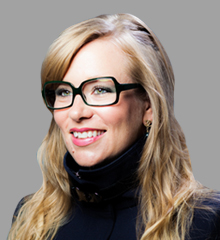 Leslie Bradshaw is an accomplished executive who is known as an innovator, growth driver and successful entrepreneur. Bradshaw has received numerous notable awards including being named to Fast Company’s top executives as one of the most influential women in technology in 2011, Inc. magazine’s 30 under 30 in 2012, and Fast Company’s 100 most creative people in business in 2013.

In addition to her work at The ExCo Group, Bradshaw serves on the Board of Hyper Island, a global learning provider enabling growth for individuals and businesses through transformative learning experiences. She is also a Partner and Co-founder of Bradshaw Vineyards and a LP at the W Fund. Additionally, she serves as interim CEO of AI company JRGN where she is assisting the leadership team with establishing offerings and processes.

Previously, Bradshaw spent four years embedded as an Entrepreneur in Residence at P&G and TD Ameritrade via a boutique consultancy Bionic. Bradshaw served as interim head of marketing for a Fintech startup with TD Ameritrade’s incubator where she was responsible for building and managing a team to drive paid and organic growth. She also coached the Fintech’s three co-founders in startup business strategy and go-to-market execution.

Prior to her work at P&G and TD Ameritrade, Bradshaw was a managing partner and COO of the Americas at Made by Many, a consulting company bridging between product innovation, human-centered design, software engineering, and business change for global brands and startup clients. Bradshaw built and co-led the office of product designers, engineers, and business strategists. She led and won competitive pitches for highly aligned business with Nike, Colgate, NFL, OXO, Showtime, Cava Grill, and Justworks. In addition, she managed client relationships for each of these brands.

Previously, Bradshaw co-founded JESS3, a creative agency specializing in data visualization. As President and COO, she built necessary systems, teams, processes, and client base to generate over $13.1M in revenue. JESS3 was named AdAge “Small Agency of the Year” for the southeast region in 2012 and was a two-time Inc. 500 awardee for triple-digit growth years under the leadership of Bradshaw.

Bradshaw currently lives in New York City. She received a Bachelor of Arts from the University of Chicago.