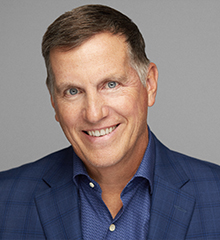 Tom Kilroy is an accomplished Fortune 100 corporate executive and board director. He brings more than 25 years of experience leading mature global lines of business, launching new geographies and startup technologies, and guiding small companies from inception through their IPO. As an ExCo Group mentor, he works with C-suite executives and senior leaders in the insurance, aerospace and defense industries.

In addition to his work at The ExCo Group, Kilroy is a board member of the OHSU Knight Cancer Institute, an international leader in research and cancer treatment. He also served on the advisory board of Jive Software (NASDAQ: JIVE) from the startup days through its IPO, as well as on the board of Acronis.

Over the course of his career with Intel Corporation, Kilroy has a proven track record of success expanding the company’s global footprint and growing startup divisions and products into highly competitive components of the $55B business strategy. Most recently, he was executive vice president of corporate strategy. Previously, he served as executive vice president, co-president of Intel Americas, and general manager of Intel’s global sales and marketing group, where he led a 5,000 employee base responsible for more than $50B in revenue of worldwide sales and marketing across the enterprise. Under his leadership, he oversaw the launch of highly successful product lines, acquisitions, and divestments, and entrance into the emerging markets of Southeast Asia, Latin America, and Eastern Europe.

As vice president of Intel’s digital enterprise group, Kilroy co-led the company’s largest business where he had responsibility for a $20B+ P&L overseeing the data center, embedded computing, and business desktop computing groups.

Kilroy joined Intel as central region sales manager for the personal computer enhancements operation, where he was responsible for creating Intel’s branded sales operation in the central United States. He transformed that product into a highly profitable, major division that was soon spun off. As a result, he was promoted to oversee sales across the U.S. and Canada as North America sales manager for Intel’s reseller channel operation in which he spent five years.

Kilroy received his bachelor’s degree in business administration from Western Illinois University. He is married and has three adult daughters.