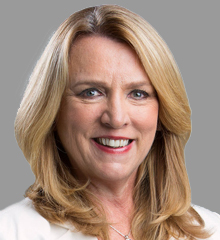 Deborah Lee James is an accomplished business executive, senior administration official, board member, and frequent keynote speaker with over 30 years of leadership experience in both the federal government and private sector. Serving as the 23rd Secretary of the Air Force for the United States of America and the President of Science Application International Corporation’s (SAIC) Technical and Engineering Sector, Deborah has a successful track record in strategic planning, operations, risk management, cyber security, talent management, and technological innovation.

In addition to her work at The ExCo Group, James currently serves as a special advisor to Bain & Company. She is also a member of the board of directors for several for-profit and not-for-profit organizations including Textron Inc., Unisys Corporation, Noblis Inc., TeraThink Inc., MKACyber Inc., Aerojet Rocketdyne, and the Atlantic Council. James is on the Advisory Boards at MIT’s Lincoln Laboratory and LeanIn.Org.

As Secretary of the Air Force from 2014-2017, James became the second woman to ever hold the position, leading the Department of the Air Force in overseeing its $140B budget and nearly 660,000 active-duty, Guard, Reserve, and Civilian Airmen. Navigating the intersection of people, policy, and budgetary concerns, James invested R&D dollars to ensure that the Air Force remained in the cutting edge of technology and forged relationships with external partners to gain access to innovations from companies the department did not historically work with. James led strategic change in human capital management and overhauled headquarter operations in order to streamline processes and reduce delivery time.

Prior to her appointment as Secretary of the Air Force, James held an 11-year tenure at SAIC where most recently, she was President of the Technical and Engineering sector. She worked closely with SAIC’s CEO and Board of Directors to co-lead the design effort that resulted in the successful split of SAIC into two distinct public companies (SAIC and Leidos). Prior to holding this role, James was the executive vice president for communications and government affairs, where she worked closely with the board of directors on reputation risk management.

Before joining SAIC, James served as chief operating officer for the nonprofit Business Executives for National Security (BENS) and spent two years as vice president for international operations and marketing for United Technologies Corporation (UTC). Prior, she served in the Pentagon as the Assistant Secretary of Defense for Reserve Affairs and also worked as a professional staff member on the House Armed Services Committee.

James received her B.A. from Duke University and an M.A. from Columbia University’s School of International and Public Affairs.