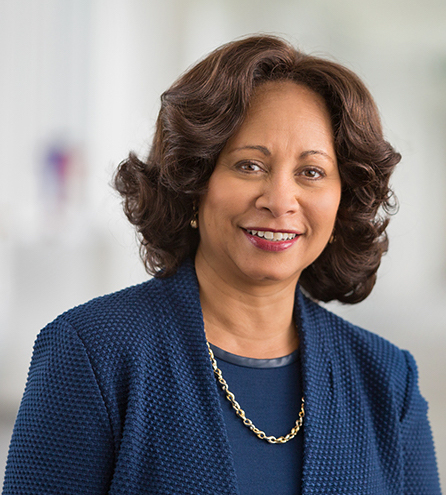 Lynn Crump-Caine is an accomplished board director and global senior executive who brings more than 30 years of leadership experience. As a seasoned member of McDonald’s senior executive management team, she was part of three strategic revitalizations of one of the world’s most recognized brands. She is also an experienced board member who has been involved in three CEO succession transitions. At The ExCo Group she serves as the Chair of the board of directors.

In addition to her work at The ExCo Group, Crump-Caine is an active member of the Board of Directors of Thrivent Financial. She has been an Independent Director of Wingstop Inc. since January 2017 and was named Lead Independent Director in March 2017. She served as director with Advocate Healthcare, the largest fully integrated not-for-profit healthcare delivery system in the Metropolitan Chicago area, for over a decade until 2017, while during her tenure she held the positions of Vice Chair and Chair. In 2018, she was subsequently appointed to the board of directors at the recently merged Advocate Aurora Healthcare enterprise, the countries 10th largest healthcare system. Prior, Crump-Caine was an Independent Director of G&K Services Inc. through 2017, as well as an Independent Director of Krispy Kreme Doughnuts, Inc. through 2016. She also held directorship positions at Ronald McDonald House Charities, the Goodman Theater in Chicago, Women Looking Ahead news magazine, and The Commerce Club, based in Atlanta.

As Executive Vice President of Worldwide Operations and Restaurant Systems at McDonald’s, Crump-Caine directed global operations departments responsible for developing growth strategies, standards, and systems, for more than 31,000 McDonald’s restaurants worldwide. Her oversight also included global supply chain, real estate development, menu management, training, and global innovation worldwide. Prior to this role, Crump-Caine was Executive Vice President of US Restaurant Systems and Senior Vice President of U.S. Operations. As a Field Executive, she was responsible for sales and profits in McDonald’s largest domestic territory. She began her career with McDonald’s at the age of 16 as a “french-fry girl”.

Crump-Caine is the Founder and CEO Outsidein Consulting, an executive coaching and strategy development firm focused on management and leadership development. Her work with clients has focused on change management, strategic thinking, business operations, communications, and delivering business results. She is a member of Women Corporate Directors and National Association of Women Business Owners. She has been recognized as Dollars and Sense Outstanding Business Women, Illinois Business Woman of Influence – Business Ledger, Women Looking Ahead-Woman of the Year, and Outstanding Georgia Citizen.

Crump-Caine lives in Atlanta, Georgia, with her husband, John. They have two adult children. She enjoys theater, sports, travel, and music, and is an active supporter of youth-based initiatives.

< Back to Teams
»
This website uses cookies to improve your experience. We'll assume you're ok with this, but you can opt-out if you wish.
Accept Reject Read More
Manage consent